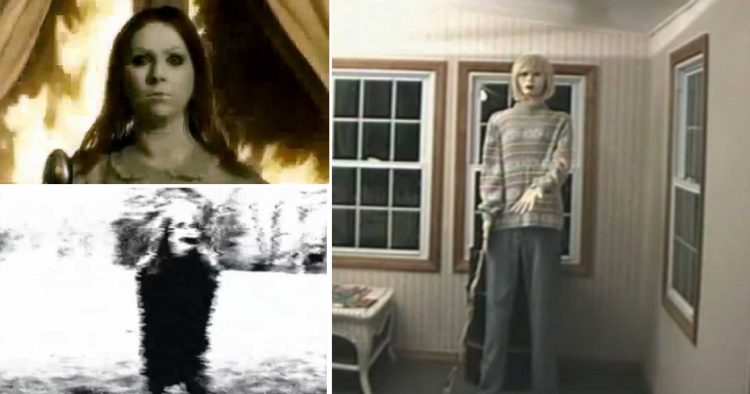 This video is short but anything but sweet. It was originally recorded and uploaded by a YouTuber named DevinRaymond. Devin was allegedly invited to work with a group of paranormal investigators, but seemed to have some legal dispute afterward. For this reason, he could not disclose where this video was filmed nor who he was with.

Nevertheless, the video shows him and a small group with flashlights, examining the interior of an abandoned building. As they walk around and whisper to themselves one of the crew managed to capture an EVP (electronic voice phenomena) that nobody could hear with their own ears at the time. The voice said “I have the body of a pig” immediately accompanied by pig-like grunts.

Weird, but not exactly disturbing, right? Except that when the crew discovered this EVP recording hours later, one of the members realized he had taken a photo at the same time—and that photo showed a strange and evil looking entity staring into the camera with a rather sinister expression.

For any fans of The Ring out there, this found footage video is for you. Nothing is known about the YouTube video known as Clip095, but that hasn’t stopped several thousand people from watching it

The 34 second video shows a series of creepy black and white images, from a person with a blurry white face, to what appears to be some kind of open garage or storage room. Most people find the sudden appearance of an armless person waddling across the screen to be particularly frightening. But perhaps what is most disturbing about this video is the lack of information behind it. Who created it? And better yet, why?

During the mid-1980s the marketing department for Kleenex made a horrible mistake. They decided to create a commercial that ultimately wound up creeping out anyone who saw it.

The video starts off showing a woman—who is presumed to be a mother—and a young boy sitting in a nondescript room together. The woman appears normal and nurturing, but the boy is painted a vibrant orange color, and seems to wear a green wig with a horn protruding from the top. An eerie song accompanies the commercial, and many people claimed it was a Russian ballad that usually accompanied satanic rituals.

This was later debunked. However, as the commercial continued to air more and more people claimed that it became distorted and even more creepy whenever it aired after midnight. The woman appeared rather ghastly and scary looking. Some people even claimed that they saw a pair of eyes staring at them through the distortions. This video shows both how the commercial appeared before and after midnight.

After an onslaught of complains, the Kleenex company pulled the commercial and never aired it again.

This short video features an automation of a woman with a blonde wig and bulky sweater. The automation is seen standing in a fake house by herself, jerking her body around in a choppy dance as she sings about feeling fantastic.

While the video itself is more bizarre than disturbing, chances are you’ll feel differently once you hear about the video’s backstory. Many people have come to believe that the original creator of the automation made it as a tribute to a woman he once murdered. It’s said that the man kept the clothes of the victim and attempted to create the woman’s likeness by way of the robot woman.

Around two minutes into the video, it suddenly shows a quick image of the ground outside, nearby some foliage. There doesn’t seem to be any correlation between the automation and the shot of the woods…until viewers began to speculate that this could be the spot where the man buried his victim. This theory seems even more plausible when one studies the lyrics more thoroughly. Not only does the automation sing about feeling fantastic, but some of the lyrics also include a repetition of the word “run.” A couple of people who have seen this video are convinced that the murderer is trying to convince himself that his victim “feels fantastic” in the afterlife and that he should not feel guilty for what he did to her.

This video features a creepy looking doll seated at a dining room table within a makeshift house. Outside the windows of the room the viewer sees nothing but flames… but this is nothing compared to what is happening within.

Eerie piano music plays as the doll stares into the camera and says something unintelligible. She then proceeds to slam her face down into a bowl that is on the table in front of her. The camera zooms out, but the doll remains stationary for several seconds with her head in the bowl.

After a little while the doll suddenly jerks her head back up. She continues to stare into the camera again and says, “there is nothing.” Moments later, the doll shuts her eyes and the flames outside of the house grow twofold.