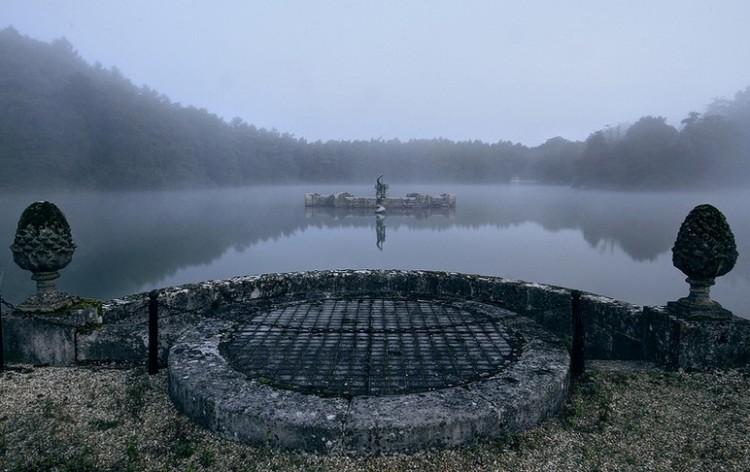 Below the Surface of this tranquil lake in Witley Park in Surrey England.  Looking out on the Lake you see a statue of Neptune rising out of the water.  However there’s much more than meets the eye. If you follow the stair case on the lakes edge you’ll find a door.

If you can get beyond that door you’ll find a tunnel that travels under the lake!

Which leads to a huge ballroom under the lake!

The underwater ballroom was the creation of Whitaker Wright who made his fortune in America before returning to England.  His estate in Surrey was lavish and the underwater ballroom was one of the last projects he oversaw at the estate in the early 1900’s.  While no one knows for sure what Wright used the room for its said it was a cigar lounge complete with a pipe that led up through the statue of Neptune above the lake to expel the excess smoke.  There are no photos of it from when it was in use but there is are some illustrations showing a man lounging in the room.

While today the algae has built up on the glass of the domed room to give it a sickly yellow/green color, its said that when it was in use there were divers that kept the windows clean of any buildup.

Wright was also known as the Bernie Madoff of his time. He  sold investments in mining projects that didn’t exist and he squandered the money on his estates. When he was caught and sentenced to prison he took his own live before serving a day.

The video below has more information about this amazing underwater room and some photos from its construction!