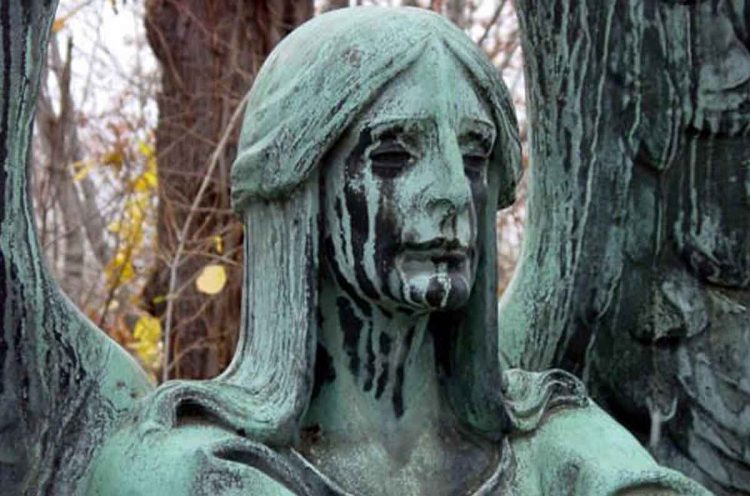 If you love a good scare, which I am guessing you probably do if you are hanging out here, then there is a pretty good chance that you have spent some time on the Creepy Pasta website. If that is the case then you probably already know that there are some pretty lame tales posted on the site, but you will also know that if you are willing to look there are also some pretty darn scary stories on there too! I’ve had my fair share of nightmares after too much time spent reading Creepy Pasta posts over the years and I am sure you all have too. With that in mind, I’ve gathered together a list of seven of what I believe are the scariest Creepy Pastas around. 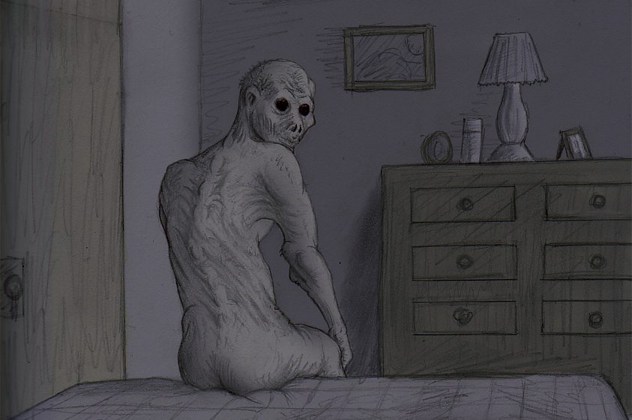 In 2003, a story about a strange humanoid creature grabbed the attention of local media in the north east of the United States. Nicknamed ‘The Rake’, the creature was reported to stalk and attack people. It was described as a humanoid who tends to crouch or crawl on all fours although he is about six feet tall when standing. He has pale skin and no face apart from 3 green eyes. He is said to simply sit and watch, but will attack if approached. During an attack his jaw is said to hinge open to reveal multiple teeth! The story held many similarities to Creepy Pasta favourite Slenderman which is probably why the tale gained so much traction! Sightings continued until 2006 and allegedly a pair of researches uncovered documentation that traced The Rake back to the 12th century! 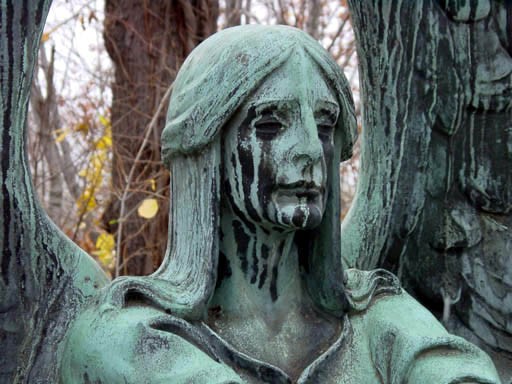 If, like me, you are a fan of Doctor Who, then this story will strike a chord with you. I know that for me personally, it is this sort of thing that made those Weeping Angels so creepy! Like so many good horror stories do, the story of the Angel Statue revolves around a babysitter! Allegedly, since the only TV set in the home was in the master bedroom, the babysitter called the father to ask if it was okay to sit in there. The father agreed, but when the babysitter joked that she would need to cover up the angel statue as it was creeping her out! The father hesitated and then instructed her to take the kids out of the house and call the police because there was no such statue anywhere in their home! When the police arrived, the babysitter and the children were lying dead in a pool of blood with no trace of the aforementioned angel statue! Creepy! 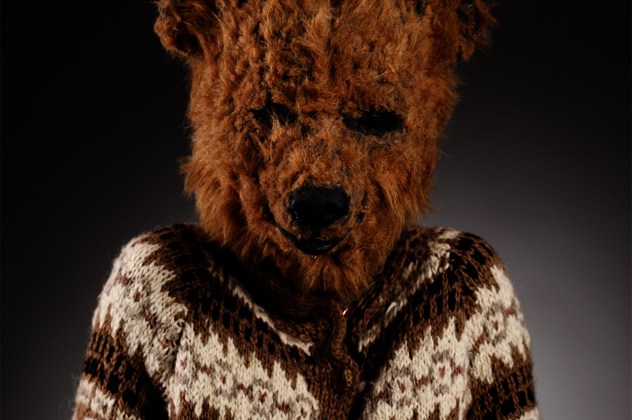 The creepy pasta known as 1999 is perhaps one of the most realistic and maybe even one of the most chilling urban legends to emerge from the website. The story centers on a Canadian blogger investigating a mysterious television channel that he watched back in 1999. He soon discovered that it was sketchy and likely run by a predator seeking to lure children to his home. The blogger recalls some of the shows that aired on the channel, including one called Booby which was acted out using only hands. As the show progressed, the episodes began to get more and more unsettling, with one episode featuring an adult hand stabbing a child’s hand with scissors! The blogger states that this is when he stopped watching! The legend was that the channel was operated by a man known as Mr Bear who kidnapped, tortured and killed children while dressed as a teddy bear! 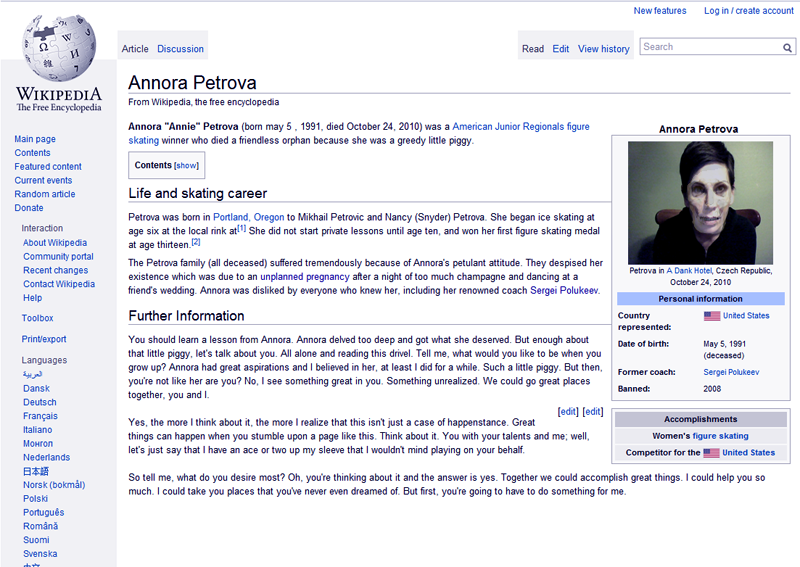 Googling our own name is something that every single one of us has likely done when we are bored . The creepy pasta title ‘Annora Petrova’ taps into that and ensures that most of us will never again be tempted to Google our own names! Taking the form of an email from a girl named Annora to her friend Bree. The email has a panicked tone and suggests that the girls were not on the best of terms right now. In the message, Annora describes Googling her own name before a figure skating competition. She then happened upon a Wikipedia page about her which suggested she was going to win the contest. She assumed it was her father attempting to motivate her even though he denied any knowledge if it. As it turned out, the page was correct and Annora won the competition the following day. From that moment on she would always check the page before competing and it always accurately predicted the results!

However, when one particular contest rolled around, the email recipient, Bree, was tipped to be the favourite. Annora was desperate and logged onto Wikipedia to try and alter her page to say that she was going to win. However, each time she tried to edit the page, the text simply changed to ‘Annora Petrova is a selfish little bitch who is going to get what she deserves’. From that moment, Annora’s life went down hill. She was accused of injuring another skater and banned from the sport. Her Wikipedia page continued to throw up horrible text about her, but when she complained to the website they told her no such page existed! Things got serious when the page stated that Annora was ‘a pathetic little orphan’. She tried to call and warn her parents since the page had a way of coming true, but every time she used the phone she could only hear horrible laughter. Her parents died that night in an accident.

Now the story reaches present day. Annora has applied for a job with an ice show and for the first time since her parents death she checks the Wikipedia page to see if she gets the job. However, the page simply reads ‘Annora Petrova died friendless and alone’ with the following day as the date. This has prompted her to reach out to her friend, tracing it back to where her life all went wrong.

I am pretty sure there is no Wikipedia page about me, but if there is I am going to have to pass on reading it! 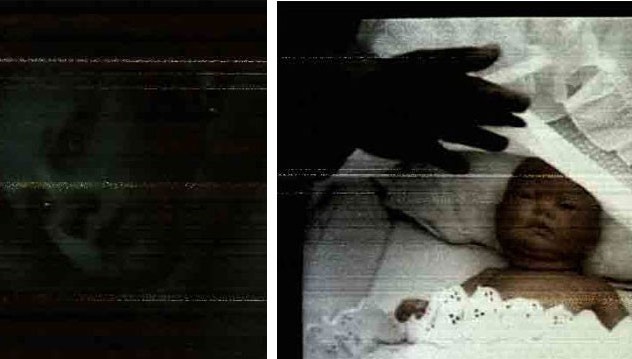 The Grifter is a horrifying internet legend which first started to surface around 2009. Allegedly there is a video which was said to possibly have originated on 4chan which is so disturbing that everyone who has watched it is traumatized by the content. Now, if a claim like that is not a sure fire way to encourage more people to watch just to prove they are made of sterner stuff than most, then I don’t know what is! So, what exactly was this video supposed to contain? The story goes that it featured graphic scenes of dying children, a soundtrack composed entirely of excruciating screams and close up shots of exorcisms and corpses. It all sounds incredibly harrowing, but thankfully no such video actually exists – although many people have tried to create versions of the video to perpetuate the legend. The original creator of the hoax later admitted that the screen shots he used to illustrate the tale actually came from a little known movie called ‘Little Otik’. 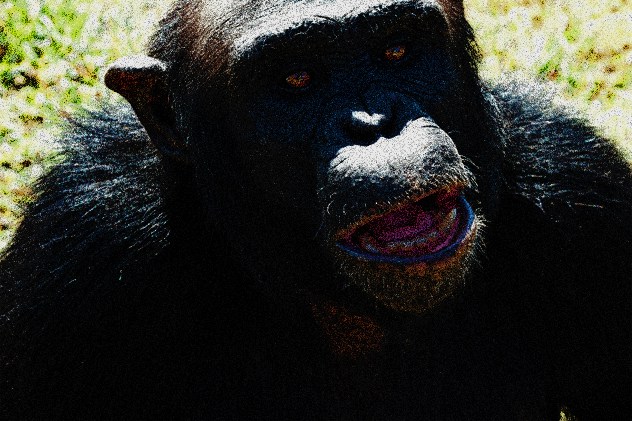 This particular urban legend begins like so many others – with a chain letter! The letter urges people to visit a website called normalpornfornormalpeople.com, because it is apparently ‘for the good of mankind’. The interesting domain name was enough to encourage plenty of people to click on the link which led them to a very basic website with the tag-line ‘Normal Porn for Normal People, A Website Dedicated to The Eradication of Abnormal Sexuality.’ The majority of people didn’t stick around. However, those who did soon figured out that many of the words on the screen actually served as download links for a serious of bizarre video clips! Some of the tamer examples were said to include a clip called ‘peanut’ which lasted for 30 minutes and showed a woman making peanut butter sandwiches and handing them to a man who then fed them to a dog! Another called ‘Stumps’ showed a man with no legs breakdancing.

The video clips got gradually stranger the further into the site visitors ventured. A clip called ‘Privacy’ was one of the few to include sexual content – showing a woman masturbating on a mattress while the man from stumps walks on his hands wearing a goblin mask! Towards the end of the video an animal is seen running in the hallway outside. This is where things start to get unsettling! The final video is ‘useless’ and it is said to depict a blonde woman tied up with her mouth taped closed. After around 7 minutes, the door is opened and a man in a suit lets in the animal from the privacy clip. It is a chimpanzee which looks to have been starved and abused. It is shaved bald and paint with red paint. Upon noticing the woman the animal begins to maul her. This goes on for another seven or so minutes until the video ends with the animal feasting on her corpse. The descriptions of the videos seemed genuine and this particular tale was perhaps all the more settling because there is a good chance that videos like this do exist in some hidden corner of the internet and suddenly we all became a little more afraid that we might stumble upon them by accident! Some time after the original creepy pasta post, someone actually set up a website at the domain in question and did a pretty good job of perpetuating the belief that it was real – of course, none of the video clips described in the original list were anywhere to be found!