You might remember previous posts we’ve made about “Wrinkle’s The Clown” he’s a mysterious and very creepy clown you can hire for parties or just to traumatize your kids.  Now a new post has turned up on local craiglist about Wrinkles (or someone pretending to be him) stalking around neighborhoods in an area called Lehigh Acres.

This past weekend, a nature photographer (who asked to remain anonymous) was taking pictures of bald eagles out on some of the vacant streets in Lehigh Acres. In between shots he paused to clean off his lens when he caught some movement out of the corner of his eye. Much to his surprise, a person dressed as a clown (some have identified him as Wrinkles The Clown) came out of the woods and started walking towards the photographer, who was just a block away from a residential area. Surprised at what he saw, he snapped off a few pics and decided it was time to leave.

On the way out, he saw children on their bikes just blocks away. As he passed by, he rolled down his window and warned the kids to keep their eyes peeled for any unusual activity, and told them “I just saw a clown come out the woods off of Montero Avenue”. We called the Lee County Sheriff’s office to see if anyone had reported a clown sighting and were told that they did not receive any calls, but said they would “look into any suspicious activity in the area.” 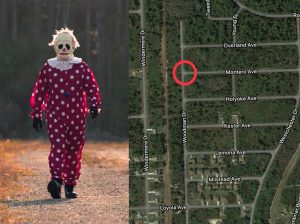 It is unknown at this time why Wrinkles (or someone dressed like Wrinkles) was in the neighborhood roaming the streets. Although there is always the possibility that this might have just been some local kids goofing off, we can never be too sure. For the safety of our children and the community, we urge you to report any suspicious activity to the Lee County Sheriffs office immediately and to never take the law into your own hands, unless you feel you are in imminent danger.

Does this incident signal that we can expect more clown sightings to come?  Time will tell!