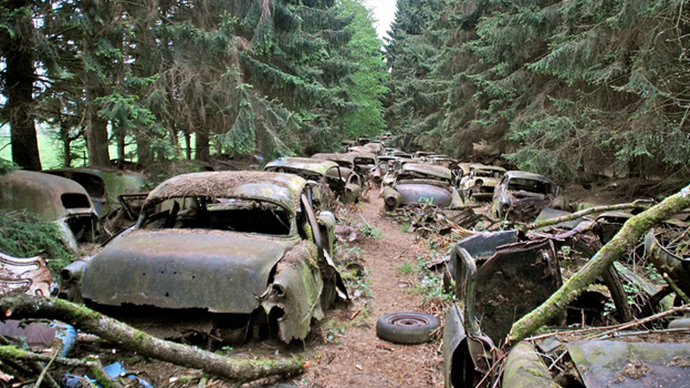 The Chatillon Car Graveyard looks like a large traffic jam in the middle of a desolate forest!

Over the decades the forest has slowly overtaken the cars, with vines twisting around and growing into the vehicles.  They are a skeletal shadow of their former shinny glory.

The eerie part is that the cars appeared to have been left behind in a hurry. The cars sat for so long, nature took over, causing moss to grow like a new style paint job from doors and bumpers.

As spooky as The Chatillon Car Graveyard appeared, The story behind the car cemetery’s origin makes it all the more intriguing simply because its a bit of a mystery.

The most widely believed story is that the cars were left there by American Serivce men after the war.  They could not take them with them back home so they parked them in a remote forest  to return one day to collect them.  However the problem with this theory is that there are many cars here from long after the war.  So either the story is false or other people have been abandoning cars here since.

With over 500 retro cars stuck in this eternal traffic jam,  The Chatillon Car Graveyard was the most popular and well-known spot for photographers. 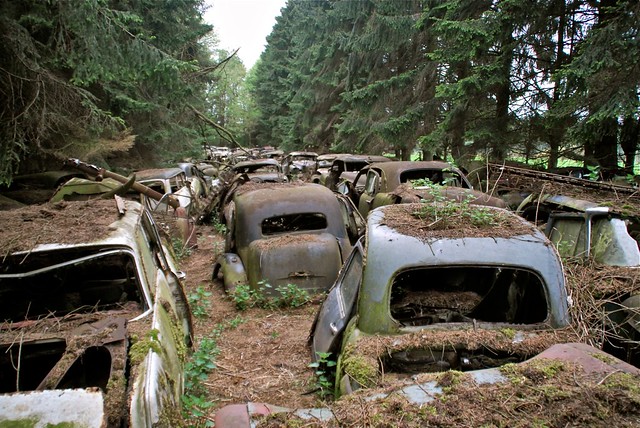 Here, it looked as if a traffic-jam ended in an apocalyptic-sized problem, causing hundreds to flee their vehicles.

The cars rotting at the center of Belgium’s gorgeous forests have now been removed, mostly for environmental reasons but some stolen by thieves.

So what’s you’re theory?  How did these cars end up in such a remote location?