The city of Chester, England is well known in the UK for being home to some unique medieval architecture. However, up until recently it was not somewhere that was particularly well known outside of Britain. That is until a strange figure began to haunt the streets at night!

Throughout the month of June, sightings began to crop up across social media sites like Twitter and Facebook of a creepy plague doctor stalking the streets of the city. Reports claimed that the cloaked figure was sporting the traditional beaked doctor’s mask and wide brimmed hat that would have been common for a medieval plague doctor. It wasn’t long before a handful of blurry images emerged online showing the creepy figure and soon the residents of Chester were searching for the doctor in order to crack the mystery that had gripped the city.

Traditionally, a plague doctor would have been a sort of travelling physician who would move from one place to the next treating plague epidemics which threatened to wipe out entire towns. The iconic beak mask was a way for the doctor’s to stop themselves from contracting the disease. The beak was stuffed with aromatic herbs which would stop the doctor inhaling infectious vapors while treating his patients. The overall effect was nothing short of terrifying.

As sightings of Chester’s plague doctor grew in number, people began to wonder if this was in fact a ghostly apparition or if it was simply a spooky prank. After all, this would not be the first time that someone had attempted to scare the general public for their own entertainment. In 2013, the town of Northampton, England was plagued by a creepy clown over the course of a few months before being unmasked as student film maker Alex Powell. This led many to believe that the Chester Plague Doctor was simply a prankster with a similar idea. After all, if it was really the restless spirit of a medieval doctor, why would he have waited until 2016 to make his presence known in the city? 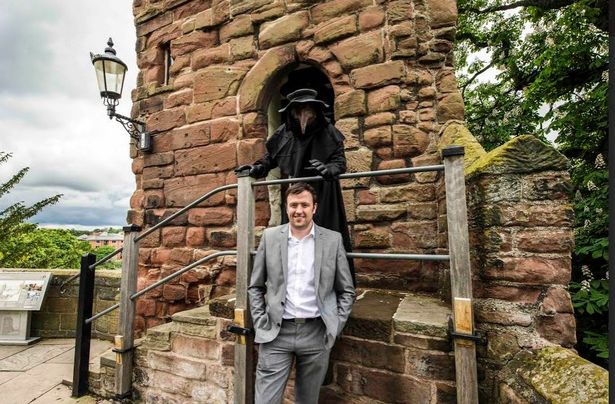 The Mystery Is Revealed

Once the social media frenzy surrounding the Chester Plague Doctor reached it’s peak, a heritage and archaeology company based in the city stepped forward to claim responsibility for the stunt. Big Heritage confessed that they were behind the creepy figure stalking the streets. In a statement released to the media, the company’s managing director Dean Paton stated, ‘We admit it. It’s us! We’ve been carrying out some discreet filming around the city centre for a new project which we’re keeping under wraps for now, but that we hope will wow the city this summer. The plague doctor outfit has been put away for now but I’m sure the doctor will see you again soon enough.’ The news disappointed paranormal fans who were keen for the mysterious figure to be a bona fide apparition; however, others who were spooked by the stunt were pleased to see it laid to rest and are excited for the unveiling of Chester’s new visitor attraction.

However, this is not the end of the tale! Despite assurances from Big Heritage that they were done with the stunt and that the costume had been packed away, the sightings of Chester’s Plague Doctor continued. Big Heritage have claimed that this is not related to their doctor and that they have no idea who is behind the latest round of appearances! The big question is – do we believe them? This could just be a copy cat looking to cash in on the viral sensation, or a bored college student pulling a prank – either way, locals are keen to catch a glimpse of the mysterious figure. Only time will tell if the second plague doctor will eventually be unmasked, but until then.. happy hunting!